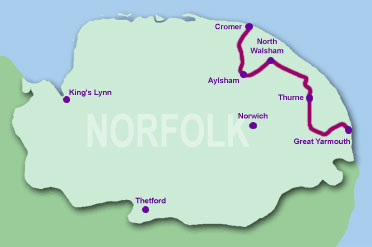 The second half of the walk is here

Weavers' Way is a National Trail and one of Norfolk's long-distance paths. The name reflects Norfolk's important place in textile history. The route joins Cromer pier and Yarmouth's piers.

At 60 miles, it's not possible to do in a single day but it is possible to do in two halves or as a series of shorter walks. The walk is linear, so some use of public transport or arranged lifts will be necessary. 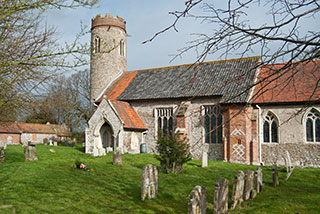 The route is clearly marked on Explorer 252 and OL40. The first half of the walk, Cromer to Stalham, is covered and clearly marked on E252. Pubs en route are also shown on those maps. There's also a very good guide on Norfolk County Council's website. They split the walk into seven parts with information about each of those parts. Weavers' Way at Norfolk County Council 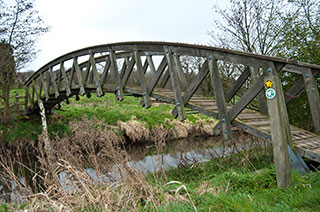 If you believe that Norfolk is flat, the climb as you leave Cromer (or arrive at Cromer if you're walking the other way) will change your mind. The Cromer Ridge was formed during the ice age. However, the rest of the walk is fairly level, partly because sections follow old railway line which has cuttings and embankments.

If you're not familiar with Norfolk, you may find the countryside more rolling than you expect, particularly the first part of the walk.

The first part of the walk, Cromer to Blickling, stands as a great 16-mile walk with beautiful countryside and good paths. 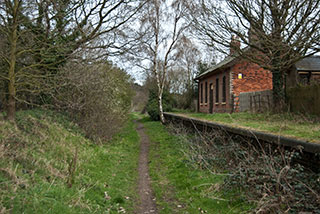 Services are available at:

My own comments about the Cromer - Stalham stretch:

blog posts about this walk:

Unlimited listening to thousands of titles: