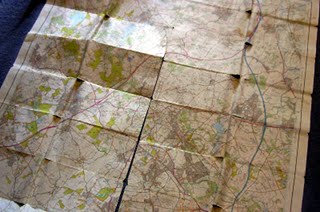 About a year ago I bought my first 'Active' map - a weatherproof version of the Explorer map of my area. It costs twice as much (about £14 versus £8 for the paper version).

The paper versions are printed on good heavy paper, but after the odd rain shower, sweaty hands, being folded and re-folded, this is the result - my last paper version of Explorer 245 resembles some holes being tentatively held together by papier mache. The cardboard cover fell off a long time ago, and it's nearly split along its length.

I've had a couple of paper versions of this map end up like this in just a few years, and so paying a bit more for a hardier version seemed like a good investment. 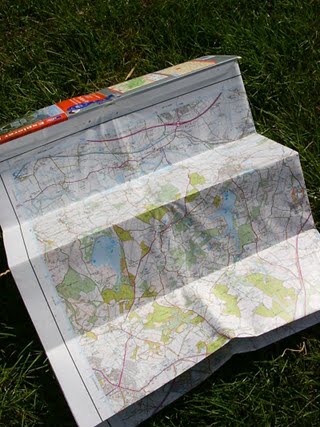 This is my Active map after about a year of good use. How's it holding up?

Initially, I was a little bit disappointed. I had been expecting a map printed on some hi-tech plastic paper. In fact it's the regular paper map that's been laminated. The corners are left square, and I could see those getting bent and splitting (I suppose I could have taken some nail scissors to them and rounded them off).

However, having used it for a year, I couldn't be happier with it. It's had the same harsh treatment that my paper ones have had; it's been out in the rain, in sweaty hands, it's had insects and blackberries squashed on it, it's been bent and folded in ways that it doesn't find natural. Yet it still looks new.

If it rains, I can just use it as normal without it coming to any harm - the water wipes or dries off. Dirt and other marks wipe off too.

The corners are a little dog-eared as predicted, but only the corners of the cover, which is slightly bigger and protects the rest of the map.

I've not tried it yet, but I understand that with the right pen, it's possible to draw / write on the surface and then clean it off when you've finished.

A map case is a good alternative. If you don't mind wearing or carrying the case, that's a good way to go. I find them a bit of an encumbrance and like the flexibility of being able to shove the map away in my pocket when I'm on familiar territory.

Bear in mind that they are being updated all the time, so a map that lasts a lifetime may be a bit counterproductive. However, it only takes one shower and a bit of handling to damage the paper version. The choice is yours!